A retirement village in Sydney contacted Malcolm Thompson Pumps for an emergency pump service as their sewerage system was blocked and if not addressed immediately would result in a sewerage overflow which would present health and safety risks to employees and residents. 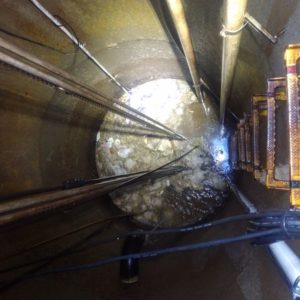 When MTP’s experienced technicians arrived on site, the control panel on the dual alternating sewerage system was on high level alarm due to the malfunction of one pump. The MTP service technicians conducted an assessment of the sewerage pit and saw that the water level inside the wet well was very high. The technicians determined there was a large amount of foreign waste blocking the system, which is not uncommon in retirement villages.

The repair of the sewerage system involved three stages, with the repair service being tailored to the specific requirements of this site.

Firstly, the service technicians pulled out both pumps via the guide rails, using a crane fitted to our service vehicle. Both the submersible cutter grinder pumps were taken apart on site, including the

After once both pumps were re-installed into the system, a sucker truck was utilised to remove all of the foreign waste such as towels, sheet, adult nappies, cleaning material and heavy paper towels from the sewerage pit. The control panel was switched back on with the pump system functional and operational with a reduced risk in the short term of a sewerage overflow.

Few days later the technicians returned to site and replaced the impellers, blades and cutters on both 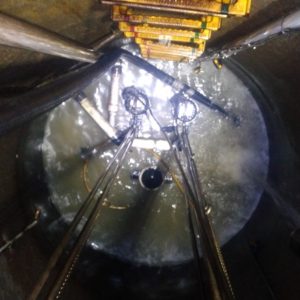 pumps, to ensure the foreign material in the system could continue to be dissected efficiently.

Once the final installation and performance check was completed, the sewerage system was switched back on with the pump system fully functional and operational. The client was highly satisfied with the outcome, with the repaired pump system and our professional service.

Whatever your pump emergency, MTP is able to assist with our fully equipped service vehicles and professional technicians located in Sydney and Perth.